Look what landed on our deck

We were sailing the coast of the Eastern Pelopponese between Monemvasia and Tiros when the fishing line began to spin. Scott could feel a gentle tug so was confident that something was on. Nothing could have prepared us for what jumped aboard! 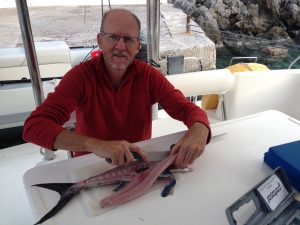 With that big doleful eye looking at us, we were in a dilemma as to whether to free his sword from the hook and let him go, or savour the wonderful flavour of swordfish. Scott delegated the decision to me, and I chose to keep him – ah! But I had to look away while Scott prepared him.

Not more than 10 minutes later and the line went again. Lo and behold, his twin brother was on the line. This was getting too much!

When I posted photos later on Whats App, brother in law Gary posted a video of an adult swordfish, and we realised how young these two were. That made me feel really bad that we had snatched two youngsters from the cradle. I had to check that status of swordfish on the sustainability index. Apparently when swordfish are caught commercially, a number of other endangered species are caught at the same time, which puts it on the list of ‘what not to eat’ if you care about wildlife. Although stocks are quite healthy of the swordfish themselves. As we had caught on the line rather than a net, it seemed like we could enjoy our two without a bad conscience.

The taste was truly phenomenal, and we enjoyed beer battered swordfish on six occasions in total, as we defrosted each portion from the freezer.