We were looking for a safe harbour on our way north into the Saronic Gulf. After rounding the fearsome Ak Maleas (the write up in the pilot guide warned of turbulent winds and rough seas, but we saw none of that), we saw Monemvasia in the guide that looked like the closest safe harbour for the night. We had headed off late from Elafonisos (1pm) so it meant a night arrival.

The passage around Ak Maleas was amazing: beautiful rock formations and the most remote church we have seen so far, perched on the tip of the peninsula. It looked like the only way to access it was by boat.

Our northerly passage was a four hour motor sail in light winds.  We negotiated safely the entrance to the harbour, looking out for the Monemvasia rock which by day is very conspicuous but less so by night.  With assistance from two friendly Northerners who helped us with our lines we came to rest alongside the quay. The British guys explained they were part of a group of people delivering charter boats to Athens and that one of their fleet had encountered an engine problem after leaving Elafonisos. It turned out we had talked with them just before our departure from the same port.

They eventually arrived under tow at around 4am, after leaving Elafonisos at 2pm. Poor guys.

The next day we explored the town, which is split into the modern part and the Byzantine village high up on the rock.  From a distance you cannot see the gem that is the Byzantine village. You meander along the causeway and start to walk uphill along the road with spectacular views of the sea and coastline. Then you pass through an archway to be surprised by the most beautiful village, restored from its Byzantine origins. There is a network of cobbled streets, churches, ancient arches and stunning views. The best thing is that it is so hidden from the modern town, so when you arrive, it is a beautiful surprise. The fact that Scott and I had not read up about the place in advance made it more special, somehow. What a find!

Its location on the rock jutting out into the sea reminds some of Gibraltar. 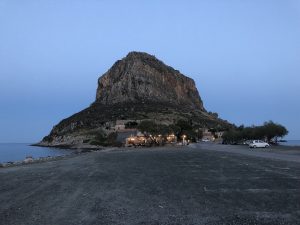 This is the view from the sea: 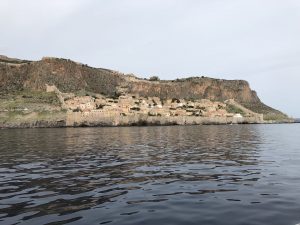 And here is what the village looks like close in: 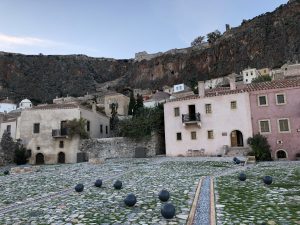