In October 2018 we left our beloved Northern Ionian to explore the Pelopponese, which are the three ‘dangly bits’ on the bottom of Greece, south of the Corinthian passage. For those needing greater geographic precision, I will be updating our track shortly!

As soon as we left the southern tip of Cephalonia we noticed the absence of other boats. We were essentially alone in the southern Ionian Sea. This was partly due to it being end of the season, but we have been told that the Pelopponese is quite deserted at most times of the year, especially in comparison to the Northern Ionian, where you can be fighting for anchor space in many bays.

The other thing I have noticed is that the town quays and marinas are rather less well manicured the further south you go. That notwithstanding, the people we have met on route have been exceptionally welcoming and pleased to see us.

The final thing to note for fellow yachties is that the distance between sheltered places gets longer: it is quite common to do six hour passages between anchorages, so weather planning is essential. We have found Predict Wind super helpful and to date, very precise.

This is the view from Kiparissia castle, with Nemrod moored in the harbour below. 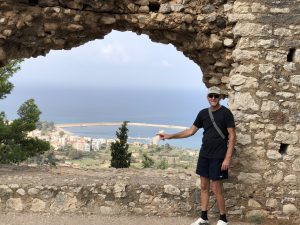