I awoke from slumber this morning to the jarring noise of a saw. Scott wasn’t lying next to me, so there was only one possible source. Hmm – what is he up to?

Sensing the possible destruction that could emanate from ‘man with saw’, I leapt out of bed to see the saw sticking out from the beautiful elongated salon table. 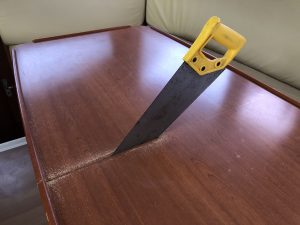 What?!! From a table designed to sit 8, I now had one that could barely sit four. And the edge where the saw had done its work was rough and unsightly. There was some explaining to be done!

Scott: ‘There were a number of problems with the table as it was. Too big for just the two of us, and the layout of the seating meant that if one of us sat at the end, the other person has to slide down the entire length of the table to join them, or sit at some distance away at the other end of the table.’ 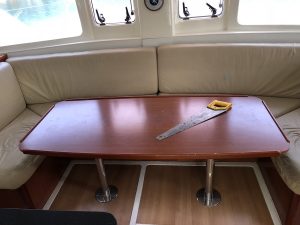 So what’s the big idea?

What we need instead is a smaller dining room table for just the two of us, that can be extended if we have other guests on board. When folded will leave half of the salon free to set up as a lounge/coffee area. So let’s have a proper test run. Out with the saw and look what a man can do before breakfast. 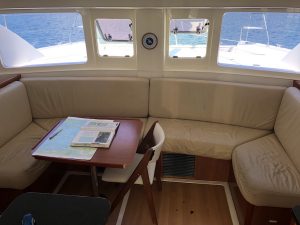 Alison wasn’t convinced and was still mourning the loss of a perfectly good table. Maybe sitting at opposite ends of the original long table wasn’t such a bad idea. I could turn my hearing off and just nod.

I was feeling pretty good about the whole idea. Gave me room to stroll around the living area. The lounge was great. Just wander in and sit down.

Back home for a few months so into the garage with my sketch. Purchased some timber and got to work. 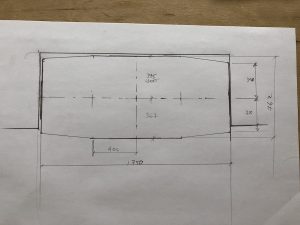 I’ve made the table about 25mm wider and 50mm longer. Also positioning the table closer to the rear long settle. I just like to sit tucked into a table. It still provides enough room to slide around.

New table delivered. Check the pedestal mounting hole positions and screw the rear beam into position. The two beams you can see will help keep the table flat. Using solid timber the table top will want to buckle along the grain. 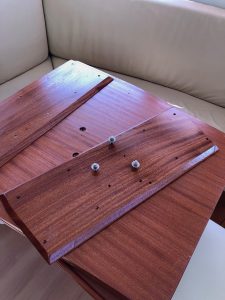 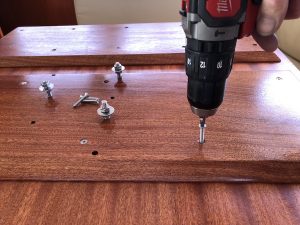 Beam positioned now off with the old and on with the new. Don’t be sad for the old table top. He will return to serve another useful task or two. 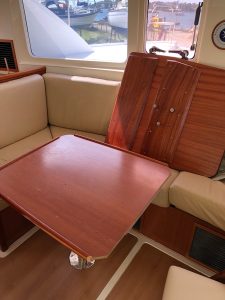 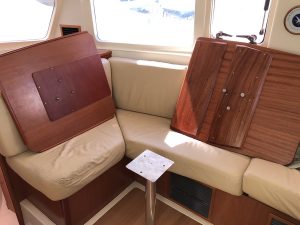 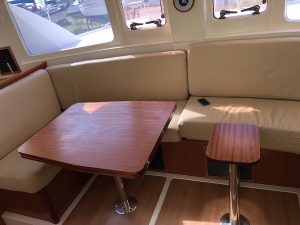 The two crossbeams under the new table top raised the table 18mm. I made a small coffee table to go on the outrigger pedestal to keep the table top level. We use the coffee table a lot however it can be removed completely if required.

New table just like the old table so what was all that fuss about. Yes I need a few more coats of Danish Oil to bring up the shine. 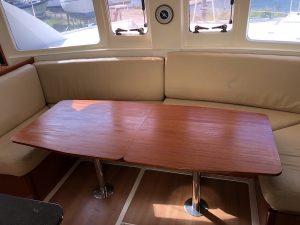 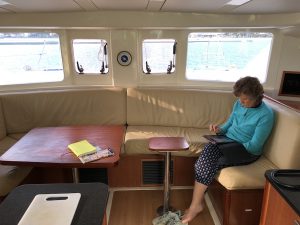 Alison: Skip forward a couple of months, and we have a NEW table and salon set up.

I have to admit, it’s pretty amazing. Made from Sapele timber that matches perfectly with the timber in the rest of the boat, it is made of two sections that can fold out to create a table for 8, while the folded version is excellent for 3-4 people. Scott tapered the ends to make the shape more appealing and applied Danish oil to give it a soft sheen.

Table folded, ideal for dinner for two, with additional coffee table in the ‘lounge’. 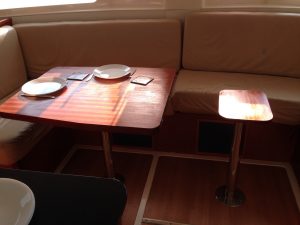 Table extended, with space for eight. 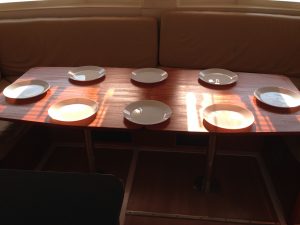 I love it!! As with many of Scott’s DIY projects, there is a shock at first, followed by an ‘Aha’ moment, that delivers an excellent result.

We look forward to many years of great meals and card games around our new table.