We headed back to Levkas and caught up with shopping for the day and also paid a visit to the weighing scales in the hardware store. Scott and I are competing to get our weight below 70 kg. The results: I was 71.25, Scott 71.50. I’m chuffed with that.

Scott has started on the mega job of wiring up with chain counter for the anchor windlass. The control is mounted at the helm, ‘just’ the wiring the complete now. 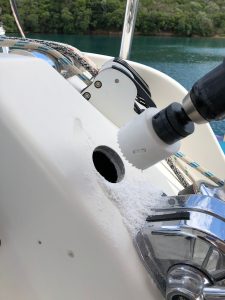 We set out from Levkas town quay with the plan to go over to Preveza to check out berthing for the summer. We made the 11am bridge opening at the Levkas canal and headed out the bay to discover a healthy 18 knots of wind and what looked like a decent wind angle to Paxos. On the spur of the moment we decided to go for it – calculating 6 hour passage in total, giving us an arrival time of 6pm.  All went well until a slight wind angle change meant we had to tack across for 10 miles to avoid the mainland peninsula.

Wind picked up to 20 knots or so and the last 3 hours were a hard slog into wind and swell. Pretty tough going.

We tied our lines at Mongonissi Bay at around 9.15pm, so 3 hours later than planned. Just goes to show you need to allow for plenty of extra time for unexpected changes.  We just made it before nightfall. So nice to lose the wind and swell.

Celebrated with BBQ chicken and salad.

Mongonissi Bay turns out to be delightful little anchorage with around 10 berths stern to at the quay, 6 anchoring in the middle and a couple of boats with lines ashore on the western side. Very protected from NW prevailing. Just a couple of underwater rocks to watch out for at the northern end of the quay – this was pointed out to us by a friendly yacht as we were about to choose the wrong spot last night.