Our next passage was 15 nm across to Sarakiniko bay on the East coast of Ithaca, just around the corner from Vathi. Highest speed was 7.9 knots with me at the helm – yay!  It felt good.

We made good time and arrived at the bay to find it wasn’t quite what we had expected. The head of the bay was buoyed off, leaving us with quite a tight spot backed into sheer cliff face, with no opportunity to back into the wind, leaving us with a side wind to deal with.

We managed to moor up nevertheless and were comfortable for the night, despite some anxiety about what would happen if the wind blew up on our side.

Scott is keen to go back there again, but I’m not so sure…

The next day we headed to Vathi to restock on food and decided to stern-to at the town quay. All went smoothly as the weather was calm.

We immediately noticed the traffic noise – what a racket after the peaceful anchorages we were used to.

Still it served a purpose – our fridge is restocked and ready to go. A huge motor launcher pulled in next to us, with around 8 guests and 5 staff on board.

For the first time ever, we were asked to bay for our spot on the town quay: 15 euros. Scott was upset!!

We also enjoyed a beautiful meal on the harbour front: seafood risotto for me, lamb kleftiko for Scott, in a newly opened restaurant called Mills, their first day. It was our celebration meal, welcoming in our new life on board Nemrod. 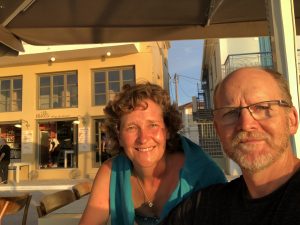 We headed away from the noise of traffic to the tranquility of what we nicknamed ‘Donkey Bay’ after the resident donkey who welcomes visiting boats with an Eeyore.

We had seen him on previous visits. This time when we arrived to silence we wondered about the fate of our favourite donkey…has he gone on a short holiday of his own to visit to rellies?

So nice to sit on the back of the boat and hear just the lapping of water on the shoreline.

We took a beautiful walk up and over the hill to the next bay along – possibly called Skhoinos beach – where white pebbles and clear blue water made it a heavenly spot to contemplate where life has taken us. It still seems incredible to me that I am living on a sailing boat in Greece – how did that happen? As a twenty something, Greece was top of the list in destinations I wanted to visit. Little did I know then that Scott would bring me here under sail.

The cooler evening brought Scott to thinking about another task on his list: fixing a new collapsible swim ladder. This involved not a little contortion, as Scott folded himself into a small cavity under that transom to fix the nuts on the underside of the ladder. My job was to screw the bolt from the top while he held the washer and nut underneath. After a little swearing from me as the screwdriver kept slipping, we finished the job at around 9.30pm and had late dinner of barbecued chicken and potatoes. 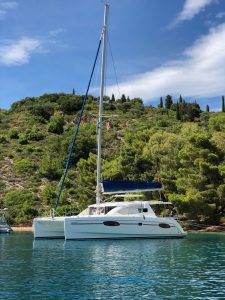 Another tranquil day of odd jobs. I cleaned the fenders, while Scott did some electrical work to wire in some additional USB ports at the nav table and in our bedroom, as well as up at the main panel in the salon. This one had the additional feature of a battery monitor, showing our current charge on the house batteries.

Our neighbours invited us for a pre-dinner glass of wine and this turned into a pleasant evening exchanging tech tips and news of good boatyards with Stuart and Anne from Susanna. They had been sailing the summer season for the last 10 years so were extremely knowledgeable.

The next day, Stuart and Anne left, and were replaced by a huge motor launch on our port side (Lady Trudy) with two super slick ribs with inboard motors.  Despite their size they were pretty inoffensive and we spent another pleasant day at anchor.  We took the dinghy for a spin around the bay, which performed well at low speed, but conked after two minutes of high speed.  Scott’s a little puzzled by it.

We also went to see where our donkey was, and found just an empty field – ah! We continued walking around the bay a little way to another beach.