Harbour rot sets in!! We were suddenly starting to feel nervous about untying the lines and kept finding additional jobs we wanted to do before leaving. Just one more visit to the chandlery, just a few more hours of shore power, let’s not pack up our folding bikes just yet……any number of excuses.

When we finally did untie the lines on Thursday 14 June, it actually felt really good. To feel the breeze zipping past, to sit on the helm seat side by side and discuss our passage options, to check our sailing stats, it all seemed very familiar and reassuring. We were doing it!!

We headed to Varko bay to test out the anchor for the night, and spent a beautifully peaceful night at anchor.

Brilliant first sail to Port Leone on Kalamos. So good to turn off the motor and feel the power of the wind pushing us along. Unusually there was a southerly blowing, so it took 7 tacks to make the passage, but it was good practice for the skipper, who by the end had figured out the best way to avoid getting the jib sheet caught on the winch at the mast.

We arrived with some rain, but it just held off for my swim to shore with the mooring lines. A couple of conveniently placed rocks made tying off a simple exercise. So nothing too demanding for our first few days out.

We spent a couple of nights here in the end – so peaceful, with just a fisherman setting his lines at night to provide the entertainment.  I took a walk through the deserted village and along the track toward Kalamos.

Scott set himself the task of getting the dinghy shipshape, installing the throttle and fuel cables, putting in a drain bung and fixing a hinge for the seat. Scott sent an email to David with the title: ‘Is this what you meant by boat maintenance in exotic locations?!’

While getting ready to take the dinghy ashore, the throttle cable end dropped overboard. A vital piece of kit for the repair. I optimistically offered to dive down and get it to which Scott readily agreed. Little did he know that I had never dived before so the results were highly amusing. The event was recorded on video, but I’m not sharing that one to preserve my dignity.

We seem to have a problem with air getting into the fuel which results in the dinghy cutting out after about 5 minutes. You have to bleed the carburettor then it starts again. Scott still has to teach me how to do this so I don’t end up getting stranded. If all else fails, we have the oars! 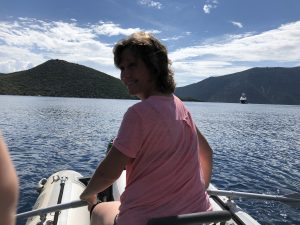