We bought our boat Nemrod through The Moorings Yacht Ownership Scheme. For three and half years, our boat was chartered by The Moorings and we spent some owner’s time aboard each year. At the end of this time, we entered ‘phase out’ which means conducting a survey on the boat to produce a list of tasks to be completed before we took over the boat from The Moorings. This process for us took one and a half years (yes, that”s one and a half years!). This was partly our own fault and partly due to changes in the process from the Greek side, meaning that paperwork sat in Athens for months waiting to be signed off by some unknown bureaucrat.

It was a happy day indeed when the final papers came through, and we just had one more hurdle to jump: getting our DEKPA, which is an annual sailing permit for Greek waters. This involved visiting the Coastguard’s office in Levkas, completing some forms, and taking them along to a bank to pay 50 euros, and then returning to the Coastguard’s office for final issue of the permit. We had been expecting long delays, but in the end this took us only 45 minutes, which was a breeze.

Here is Scott outside the office with the final papers. We need to keep these papers on the boat ready for inspection at any time by the marine authorities. 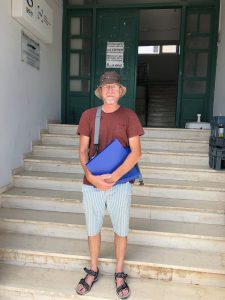 All we needed to do now was raise our flags and untie the lines.