How it all began

Back in 2012, we visited our great friends Romie and Oliver in Auckland. During the trip we had the opportunity to take a trip on a former America’s Cup yacht in Auckland Bay. From this moment, the idea originated in Scott’s mind for a retirement hobby. Sailing ticked all the boxes: lots of mechanical bits and pieces, an engine to maintain, a degree of physical exertion, and a taste for adventure.

From there, things quickly progressed. The Day Skipper’s license was achieved, the theory studied, and a few charter boats later, Scott was keen to buy his own boat. 5 years later and Nemrod became a reality. On the 14 June 2018, we took possession of our Leopard 39 catamaran. 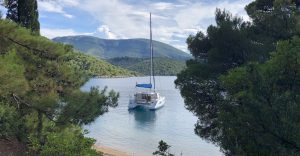